The fourth edition of Danilith Nokere Koerse promises to be a top edition. A course with a total of 9 hills, 6 of which are cobbled. A total of 15km of cobbles spread over 129.1 kilometres. Almost all Women's WorldTeams have already signed up. So that promises for the field of participants!

We are looking for a successor to European champion Lorena Wiebes. The Dutch rider won with a lengthy lead on Lotte Kopecky in a mass sprint. Marta Bastianelli completed the podium.

With an increased prize pool equal to that of the men, the riders started the race with extra motivation. For the first time, the race was also broadcast live on television. Top favourites were Lotte Kopecky (SD Worx), Grace Brown (FDJ Nouvelle-Aquitaine Futuroscope), Marta Bastianelli (UAE Team ADQ) and Lorena Wiebes (Team DSM).

After the riders finished the first hill, the Lange Ast, Mieke Kröger escaped from the peloton. The German of Human Powered Health soon had a 25 second lead. On the Tiegemberg she extended her lead to 35 seconds. Just before the first climb of Nokereberg, Grace Brown dropped out of the race. The Australian finished second last year, but now decided to give up after a fall. Meanwhile, Kröger was caught up by the peloton. Noemi Ruegg (Jumbo-Visma) was the first to reach the top of the second climb of Nokereberg. The Swiss took the mountain prize.

Unfortunately it was a race with many crashes. Alice Barnes (Canyon SRAM) had to leave the race early on due to a crash. Elynor Backstedt (Trek-Segafredo), Chloe Hosking (Trek-Segafredo), Charlotte Kool and Elise Uijen (DSM), who won the regional race in Nokere on 12 June, also had to endure a fall.

In the last local lap, Femke Markus and Mischa Bredewold of Parkhotel Valkenburg escaped. The duo had a 20 second lead. Both riders were caught up by the peloton eight kilometres before the finish. One thing was certain: the race was going to be decided in a mass sprint.

In the end Lorena Wiebes won by a length of time. The Dutch rider was the strongest over Lotte Kopecky and Marta Bastianelli. Remarkable: Wiebes won the first edition of Nokere Koerse in 2019. Lotte Kopecky then finished third. Wiebes sprinted to victory earlier this season in the GP Oetingen and the Ronde of Drenthe. 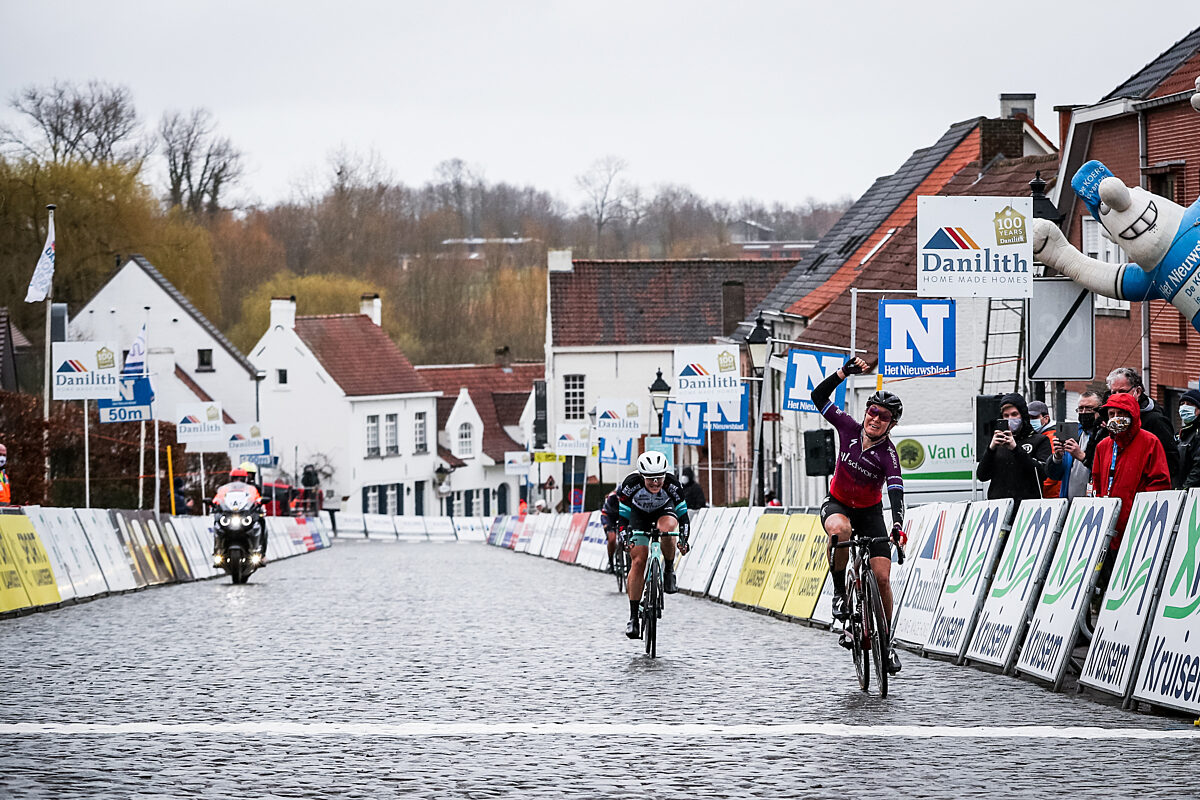