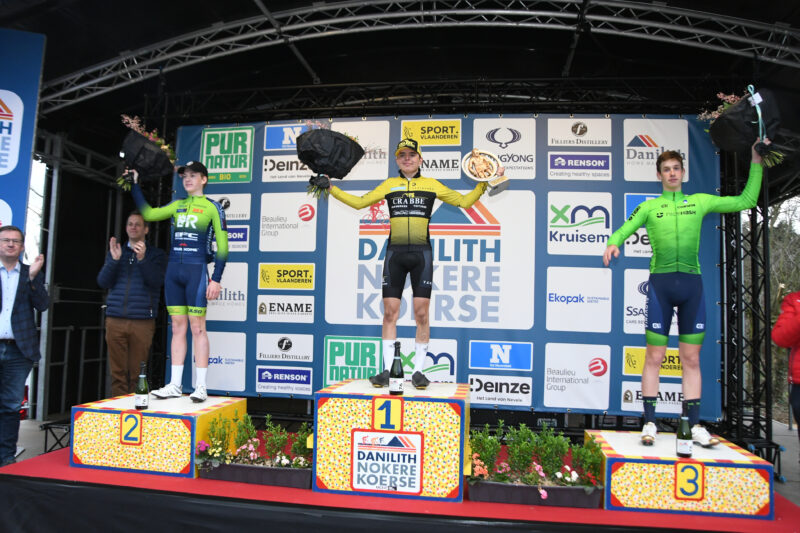 Nokere Koerse for the juniors took place on Saturday. After three hours of racing, a group of three riders fought it out. Fellow countryman Jarno Widar (Crabbe Toitures - CC Chevigny) won the race ahead of Norway's Simen Evertsen-Hegreberg and Slovenia's Grega Podlesnik.

137 juniors were present in Nokere for the first big Flemish test of the season. At the first local lap, after seventy kilometres and many cobbles, four riders got away. Briton Matthew Brennan was able to complete the jump to the four leaders. Jarno Widar, Van Der Meulen, Podlesnik and Mouton also ventured the jump to the leaders. Three of the nine went into the final: Widar, Evertsen-Hegreberg and Podlesnik.

Jarno Widar lost a minute on the leaders earlier in the race but was able to fight back: "After the crash I was able to get back to the first group. On a slope I saw three riders slip away. I jumped to them and got to the front of the race. When there were three of us left, nobody wanted to ride. I tried to maintain the pace, which allowed us to stay in front." In the sprint Widar narrowly beat Evertsen-Hegreberg. Podlesnik completed the podium.

The peloton with the favourites finished fifteen seconds behind the three leaders.